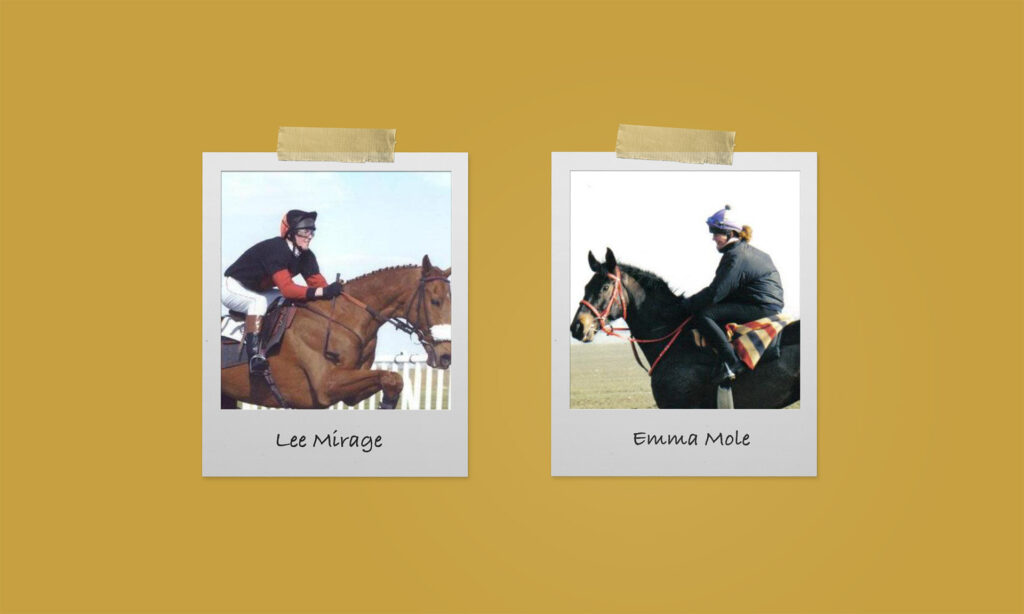 ‘When Harry met Sally’, by Mirage aka Lee Moulson

At the mere age of 22-years-old, when I was riding as a Jump race amateur jockey and helping my then partner train Point-to-Point horses, I also worked for a Warwickshire racehorse trainer (Permit Holder) in the tranquil and picturesque surroundings of Wixford village.

This trainer shared exercise gallops with another local racehorse trainer and I would say ‘Hola’ to his staff every morning as we trotted, cantered, and galloped on by. Often bringing up the rear was a curly-haired lass called Emma (aka Mole) who was the assistant trainer/racing secretary/multi-skiller for said trainer. As we started to chat it struck me that Emma had a brain, with more strings to her bow than the London Philharmonic Orchestra, and I was intrigued to have further conversations, so we became friends.

A plethora of pizza and wine nights later the friendship was solidified and off we went to conquer what we could! Our first mission, a couple of years later, was to get what I thought was a ‘proper job’ – really meaning not getting up at 5am every day and do a 12 hour shift looking after horses; in all honesty life working in racing yards were the best years, but for a young person. At 24 years old we were starting to feel the cold, knees were cracking and body aching as we had started in racing aged 13/14 – it was time to think about the future.

In order to ‘get out’ of racing yards but still stay in racing, I found a degree at Warwickshire College; a BA (Hons) in Business Management for the Racing Industry. I mentioned it to Emma riding-out one morning and suggested she joined me. “Let’s just go for it” I said, a motto which has become our mantra to this day, and off we trotted to enrol on our University course. Back in 2004/5 there was no real support from the racing industry bodies for stable personnel wishing to transition out of racing yards, not like there is now. We had to leave the industry for a while, pay for the course/our expenses and laden ourselves in debt for a few years – you have to speculate to accumulate as they say.

Couple of years into the course, an assignment for a Business Innovation module was to complete a consultation project for a business. As I had connections with a local racecourse through my part-time work (to help pay for the course, albeit the contribution was a meagre pebble dropped into the ocean of escalating debt!) we approached them to assess and advise on their 300th year birthday celebrations; specifically a sales and marketing plan to drive/increase attendance for a particular July fixture. Naturally, we knocked it out of the park and created a spectacular piece of work for them to implement – and there you have it, Mirage and Mole the consultants were born!

‘What really happened’, by Mole aka Emma Marley

Himself puts it so eloquently about how we met. Well what really happened was, I was hanging on for dear life, off a horse at the back of the string as it was ‘acting the goat,’ and once under vague control again, Mirage looks me up and down (as if thinking what the heck is she doing on that) and pipes up “Alright!?!”

No, I’m not blooming alright (I thought to myself – who is this joker, what am I riding this lunatic animal for and why am I here?!) So when he came and asked me “what are you doing for the rest of your life” (no, not a marriage proposal),”… do you want to come and do this and that course at Uni”, I jumped at the chance not to be playing racehorse roulette on the gallops.

What Mirage fails to mention in the above, is how we got our monikers. So here’s the scoop – marketing lectures at Uni, where innovation occurred and alter-egos were born, took place post-lunch in the 3pm graveyard slot. Anyone who has been to Uni knows that lunchtimes aren’t always dry! On this particular dreary day in autumn 2006, we were on flying form and the task set was to brand an item. We took it one step further and decided to completely re-brand ourselves – “well you’re Mole like Marley; you squint your eyes (I’m perpetually in sunglasses as I’m light-sensitive or because I’m half vampire), you dig about, have hands like feet and have a ‘barnet fair’ the colour of one!” Is this guy for real, I thought. Then it hit me – like a freight train “Charming! Well you’re a Mirage – are you for real or are you not, the cheek on you!”